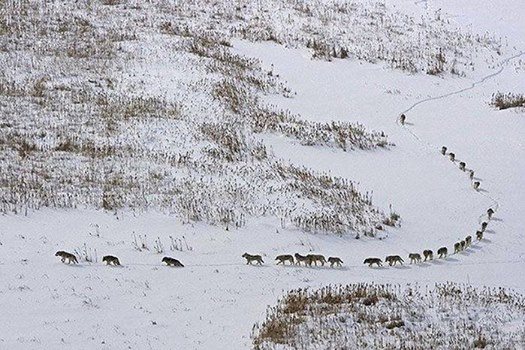 You, me and 91,000 other people have read this post  Wolf Pack by Barbara Hermel Bach on Facebook.

“A wolf pack: the first 3 are the old or sick, they give the pace to the entire pack. If it was the other way round, they would be left behind, losing contact with the pack. In case of an ambush they would be sacrificed. Then come 5 strong ones, the front line. In the center are the rest of the pack members, then the 5 strongest following. Last is alone, the alpha. He controls everything from the rear. In that position he can see everything, decide the direction. He sees all of the pack. The pack moves according to the elders pace and help each other, watch each other.”  Cesare Brai’s photo.

I think it’s an interesting metaphor for leadership. What if, in corporate life, we organized ourselves this way?  Instead, we hail the leader at the front of the line.  The strongest team members follow close behind, with the oldest, sick and weakest left behind to fend for themselves or, better yet, dismissed entirely.  So, what is the point of corporate life today?  If the point is to ensure the financial stability of the organization, then letting go of low-contributing members, despite any historical value, may be the right thing to do. However, if the organization exists for the benefit of the community, in the largest sense, how does the organization with its seemingly vast resources care for it’s community members?  Is the leader’s role to ensure that all are taken care of, not just the top performers?

In fact, what is more likely the case, the poor leader spends far too much energy on the lower-performing members by way of “performance management.”  My experience is that managers try to give someone who is flailing a very long rope in hopes of avoiding inevitable conflict.  All the while the stronger members are frustrated with the lack of  movement.  In this way, the pack moves according to the slowest members pace, however not helping each other.  I would be interested in hearing others’ reactions to this post as a metaphor for organizational leadership…

2 thoughts on “Pack of Wolves, a Model for Leadership?”